2014 Oscar Nominees for Animated Feature Film and Animated Short Film - Where Did They Go To School?

Animation is one of most magnetic and highly competitive career fields on the planet. It takes a tremendous amount of talent, a dogged desire to succeed, and an ample amount of education and experience to get your foot in the door. It also takes more than just a modicum of luck. On the education front, yes—it really does matter, so we thought it would be interesting to see where this year’s Oscar Nominees for Best Animated Feature and Best Animated Short Film decided to hone their craft before entering the wild world of animation. 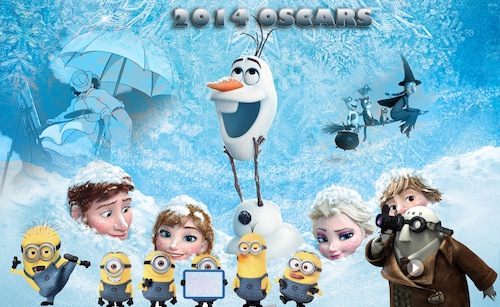 So just where did these uber-talented animators go to school? Here you go. . .

Kirk DeMicco graduated from the University of Southern California in 1991 where he majored in economics and political science. He has worked with Disney, Warner Bros., DreamWorks and Spyglass.

Kristine Belson is a producer at DreamWorks animation. She studied Liberal Arts at Trinity College in Hartford, Connecticut and interned at Sterling Lord Literistic Publishing in New York City. Belson graduated in 1986.

Pierre Coffin attended Gobelins L'École de L'Image (Gobelins School of Image) in Paris. Coffin is also one of the voices behind The Minions.

Chris Meledandri attended Dartmouth College. He is the founder and CEO of Illumination Entertainment and a member of The Academy of Motion Picture Arts and Sciences.

Frozen - WINNER!
Chris Buck, Jennifer Lee, Peter Del Vecho
Chris Buck studied character animation for two years at California Institute of the Arts (CalArts). Buck also taught at CalArts from 1988–1993 and is best known for his work on the Disney film’s Pocahontas, The Little Mermaid, and Who Framed Roger Rabbit.

Jennifer Lee graduated from Columbia University School of the Arts. She is the first woman in Walt Disney Animation Studio’s history to act as a director on one of its animated features.

Peter Del Vecho graduated from Boston University with a Bachelor of Fine Arts (BFA) in Theater Production. He is a producer at Walt Disney Animation Studios.

The Wind Rises
Hayao Miyazaki, Toshio Suzuki
Hayao Miyazaki graduated from Tokyo's Gakushuin University in 1963, but not with a degree in animation. With degrees in political science and economics, Miyazaki went on to win an Oscar in 2003 for Best Animated Feature (Spirited Away with Toshio Suzuki) and he received a Lifetime Achievement Award at the Venice Film Festival in 2005. Hayao Miyazaki is 73.

Toshio Suzuki graduated from Keio University, Tokyo in 1972 with a degree in literature. He went on to win an Oscar in 2003 for Best Animated Feature (Spirited Away with Hayao Miyazaki). Toshio Suzuki is 66.

Feral
Daniel Sousa, Dan Golden
Daniel Sousa graduated from the prestigious Rhode Island School of Design (RISD), where he studied animation and painting. He is a founding member of Handcrankedfilm, a filmmakers' collective. In addition to teaching at his alma mater since 2001, Sousa has taught at Harvard University, The Museum School, and The Art Institute of Boston.

Dan Golden is also a graduate of Rhode Island School of Design (RISD). Feral is the fifth and latest collaboration with longtime friend Daniel Sousa.

Room on the Broom
Max Lang, Jan Lachauer
Max Lang is a graduate of Filmakademie Baden-Württemberg and the Animation School Hamburg. In addition to his Oscar nomination, Lang is a BAFTA-nominated animation director.

Jan Lachauer studied at Filmakademie Baden-­Württemberg in Ludwigsburg and he studied 2D animation at the Paris’s Gobelins, l’école de l'image. Room on the Broom is Lachauer’s professional directorial debut.