Themed entertainment is a multi-billion dollar a year industry that has expanded exponentially in recent years. With a variety of industries that utilize themed experiences to drive consumer and audience engagement, professionals work in interdisciplinary teams to bring creative visions to life. Despite the growing use of themed experiences and the exciting career opportunities they present, there’s been little in terms of formal higher education that caters to the field. The University of Central Florida’s MFA Track in Themed Experience seeks to remedy that, and leverages its Orlando location to and close connections its fullest advantage.

UCF pegged digital artist, animator, author and Professor Peter Weishar to develop and direct the Themed Experience MFA track which finds a home in the university’s Theatre Department. This isn’t the first time that Weishar has bridged the gap between industry and academia. For years, he has worked closely with major industry players to identify learning outcomes and create curricula that respond to the many facets and constant evolution of the field. He is a member of the Themed Entertainment Association- the largest and most influential association of professionals in the field- and he frequently lends his insight to initiatives that promote the development of the next generation of creatives in the field.

Directing the MFA program at UCF may be Weishar’s biggest job yet, but one which he has enthusiastically embraced. In this interview, we catch up with him to talk about the intricacies of the program, as well as the state of the industry and where it’s headed. Enjoy.

ACR: Peter, before we get into UCF’s MFA Themed Experience track, let’s look at the big picture. Where do we see themed experiences in action today?

Peter Weishar: At its core, themed experience is the interaction with an environment that is designed to tell a story. Theme parks are the most prominent example that usually comes to mind, and rightfully so, because they are the wildly popular and quintessential purpose-built environments where the audience becomes a “guest” and part of the story. The theme park industry must create new experiences and attractions to drive attendance Therefore, there seems to almost always be something new and more exciting to be a part of.

However, there are dozens of other applications for theming that create compelling and immersive environments. Retail, dining, interactive, museums, zoos, aquariums, libraries are all embracing themed environments to create compelling environments. We are also seeing a large proliferation of pop up and small-scale experiences like escape rooms, integrated VR experiences like “The Void”, as well as interactive art spaces like Meow Wolf and the Museum of Ice Cream. 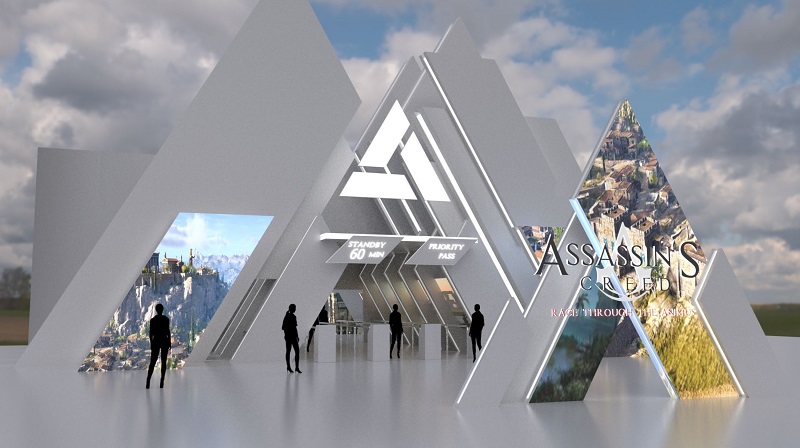 ACR:  As an animator, digital artist, and educator, you’ve been instrumental in bridging the gap between themed entertainment industry needs and academic offerings. What prompted you to help trail-blaze this relatively new academic arena?

PW:  While I taught in and oversaw animation programs for many years, my area of specialty was interactive digital environments. My first book was titled Digital Space. I was working in a game company when I was hired to teach digital media well before it was established as a widely accepted academic discipline. So I’ve been through this before. Academia has a slow and methodical process of vetting and adapting new ways of thinking and new forms of creative expression. While it can be daunting to be the champion of a new academic discipline, I understand the need for careful scrutiny and caution because our students are placing their education and future in our hands.

I came upon the field of themed experience differently than most of my colleagues. I actually did not step foot in a themed park until I was 31. I was already a designer and had been through many years of art school. I saw the parks through the eyes of an interactive designer. They were the world’s largest and most successful interactive stage set. I could also see the correlation between storytelling in the carefully crafted user experience in the digital world and the tangible guest experience. Years later when I was a dean at Savannah College of Art & Design, I developed and taught an off-campus class with Walt Disney Imagineering. The Imagineers in Orlando were amazing partners and they made the class a success. In 2007, I was inspired by Randy Pausch and his last lecture at Carnegie Mellon University where he spoke about the formation of the Entertainment Technology Center. That gave me the inspiration to turn an idea for a single class into a full degree program. 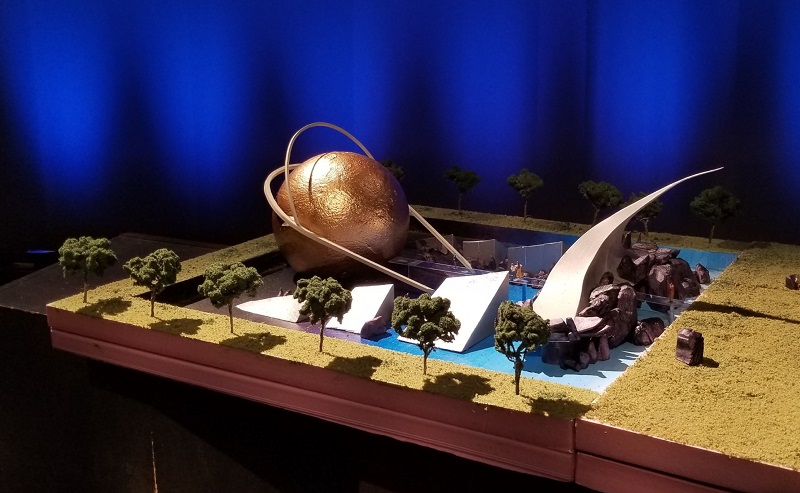 ACR: After time spent developing themed entertainment curricula at Savannah College of Art & Design and Florida State University, what attracted you to academically uproot and found the University of Central Florida’s MFA track in Themed Experience?

PW: There are a few different reasons. First, Orlando is the international hub of the themed entertainment industry. It is home to many of the most popular and successful theme parks in the world, as well as home of literally hundreds of creative firms designing and producing cutting edge work. The breadth and depth of the talent here is unmatched. Some of the most prominent schools of art and design and film emerged in the international hubs of entertainment and design of New York City and Los Angeles. Orlando, as the epicenter of themed entertainment, is the perfect location for a themed experience program to flourish.

Second, the University of Central Florida is one of the largest and most diverse higher educational institutions in the country. Producing successful large-scale themed entertainment requires multidisciplinary collaborations and UCF has incredible strength in engineering, hospitality, theatre and digital and visual arts to name just a few disciplines. UCF also strikes the right balance between career preparation and engagement with industry, academics, and research. I believe the students here will be prepared with the skill sets necessary to enter the profession while they will also have the academic rigor and credentials that are imperative for a terminal degree program.

Third, but certainly not last, is support and leadership that is willing to take risks and share a vision. When I proposed the idea of a graduate program in Themed Experience to Jeffery Moore, Dean of the College of Arts and Humanities at UCF, he immediately saw the potential and the logic of creating this program in Orlando. Jeff is the one who made it happen at UCF.

ACR: What are the key components of UCF’s themed experience program that distinguish it, in your view?

PW: Our program at UCF has a few distinguishing qualities. We have an extensive internship component built into the curriculum that would not be practical almost anywhere other than Orlando. Ostensibly, the third year of the program is designed to focus on the thesis project and internship. We also have a terrific and prominent Advisory Council comprised of local creative and business leaders that has been instrumental in connecting UCF with industry. The council has helped guide the development of curriculum and has provided direct feedback to our students. And we are part of a major research university located in the heart of the themed entertainment industry. The MFA track in Themed Experience is a Theatre degree, so students get a strong education in scenic design and theatrical storytelling. We are also a part of a major research university so there are many opportunities for interdisciplinary collaboration. 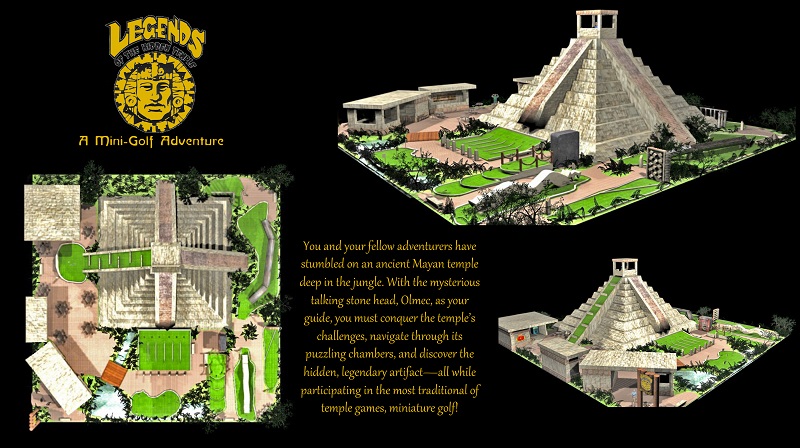 ACR:  Professionals in the field come from broad backgrounds and bring diverse skill sets. Are your MFA students equally diverse in terms of their undergraduate majors and strengths?

PW:  We try to emulate the same mix of expertise as found in the field when accepting each cohort of students. That means each class has some writers, producers, illustrators, 3D artists, designers, and TDs. For collaborative projects, the students learn to utilize their skill sets in concert with the group. For faculty, we strive to have the right mix of working industry professionals and professional academics to balance skills and aesthetics. We are lucky to be in Orlando where the best talent is available to teach.

ACR: Given the rapid rate of technological advancements and market evolutions, where do you see themed experiences going in the next decade? And how do you best prepare students for the unforeseen challenges and changes of the future?

PW:  I have been in academia long enough to see faculty jump on “the next big thing” and by the time they change the curriculum and graduate the students, the industry has moved on. So we try to develop a curriculum that focuses on perennial skills while anticipating major trends. In the next few years, I see a trend toward greater utilization of mobile tech that guests bring with them to the park. We will be using our mobile phones for virtual queue lines, wayfinding, fast passes, reservations, ancillary expenditures, in-park-augmented reality games, and extending the experience beyond the gates of the park. I also see some brilliant work being done with projection mapping. I expect to see increased utilization of projection mapping to inexpensively augment and update rides and attractions. In the long term, I see theming as an important trend that will revitalize retail and become de rigueur enhancements for the guest experience at libraries, museums and theatrical events.

ACR:  What are the most important ‘soft skills’ that a professional in themed experiences must develop?

PW:  Most people in industry and academia would agree that the most important soft skill is the ability to collaborate with a diverse team. I would say that equally important is understanding the practical implications of design decisions. This is gained through experience working on site.

ACR: As we speak, the Covid-19 pandemic has taken a great toll on many industries that leverage themed experiences. What do you make of the industry’s ability to recover and adapt?

PW:  We have seen tremendous and sustained growth in the themed experience industry. Decision makers tend to follow successful formulas when expanding and updating experiences. Difficult times like these will spur theme parks to try new things and develop solutions. In the short term, the parks need to entertain and engage large numbers of guests without packing them into long queue lines and crowded shuttle buses. We may find that we can create a more enjoyable guest experience with these new guidelines.

Also, when talented people are laid off from major firms they do not stop being talented. Many will go on to form their own studios that specialize and innovate in ways we have not thought of. This change is going to be difficult but when the industry ramps back up it will be more agile, diverse, and innovative.

ACR:  Lastly, Peter, how do you envision the MFA program at UCF influencing the greater Orlando area and themed experience in general?

PW:  Local creatives looking to advance their careers in the industry can stay in central Florida while gaining the education they desire. This also keeps our talent in the area, rather than seeing our up-and-coming leaders leave for other locales.

Over the next few years as our program grows in scale and reputation, I expect our students and grads to have a significant impact on the creative environment here. We will have a major research university- one of the largest in the country- with multiple cohorts of graduate students dedicated to innovation, research and creative exploration right here in the hub of the industry. Over the years, we can see that the major film schools like NYU, USC, AFI, and UCLA, located in the creative hubs of LA and New York, have had a tangible, positive impact on the film industry. I believe UCF is poised to become a catalyst for new ideas and innovation in themed experience and entertainment.