Top 100 Most Influential Video Games of All Time - Page 9 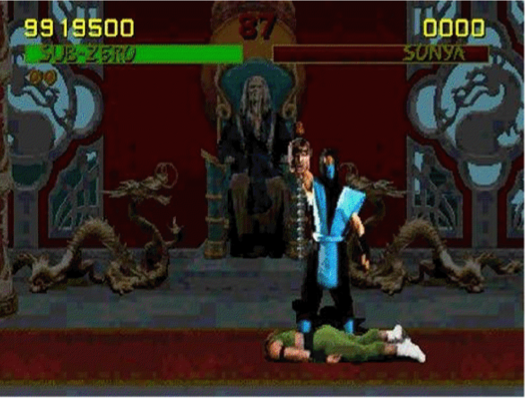 20. Mortal Kombat (1992). As a game it certainly wasn’t as influential or even as good as Street Fighter II, but when you include its cultural ramifications you’ve got the most famously violent video game of all time. Along with Night Trap (1982) and Legal Enforcers (1992), Mortal Kombat is the main reason there were Congressional hearings on violence in video games, which was so influential that it led to the creation of ESRB rating labels that every game in the future had to use if they wanted to be sold in stores. That means Mortal Kombat indirectly influenced almost every game ever made after its release, which is something not even the upcoming games on this list can boast. Mortal Kombat also helped keep the genre alive for other mainstream fighting genre game series such as Tekken (1994), SoulCalibur (1998), and in recent years also the BlazBlue (2008) series.

19. Bejeweled (2001). Look, I don’t like it any more than you do that a rehash of hundreds of Newgrounds flash games got bought over 12 million times through the Apple App Store, but Angry Birds (2009) is proof that a casual game clone with a larger marketing budget can profit immensely off of others’ game ideas. So what started this casual gaming cacophony? Bejeweled. This puzzle game has been downloaded well over 150 million times since it was first released as a PopCap Web browser game in 2001, and it went on to amass a total of 50 million copies in sales in its first 10 years. With a game budget so low and a profit margin so damn high, you could argue Bejeweled is the most successful game of all time. Shout-out to Peggle for raking in extensive casual game profits of its own in 2007.

18. The Sims (2000). Two years after The Sims was released it reached the sales landmark of 6.3 million copies worldwide, which finally put it ahead of Myst (1993) as the bestselling PC game of all time. The Sims was so influential that it didn’t even have a target audience. Males, females, children, adults, elderly, and any combination in between: they all caught the Sims addiction and the series’ sales make every other PC game series in existence look amateur. The original game alone (there have been dozens of successful sequels and spinoffs) currently has a total of 11.22 million global sales, which is almost twice as many copies as the original World of Warcraft game has sold to date. It’s also worth pointing out that twenty of the top one hundred bestselling PC games of all time are from the Sims series. In that sense, The Sims isn’t the Mario of the PC game industry, Mario is the Sims of the console game industry.

17. Final Fantasy I (1987). If you add up all the sales of all the Dragon Quest (1986) games, you’re looking at 57 million units. Do the same for all the Final Fantasy games and that number goes up to 97 million. While it might have stood on some dragon sized shoulders, it’s still the most famous RPG series of all time. This is the game that hatched the Square shaped egg and birthed one of the largest video game development companies this planet will ever know. Fun Fact: There’s always been a rumor that the game’s name came from the company coming close to bankruptcy and giving the game industry one last shot. While it’s similar to the truth, it’s still false. Here’s a quote from Final Fantasy creator Hironobu Sakaguchi on the name’s origin: “The name ‘Final Fantasy’ was a display of my feeling that if this didn’t sell, I was going to quit the games industry and go back to university. I’d have had to repeat a year, so I wouldn’t have had any friends – it really was a ‘final’ situation.”

16. Pong (1972). You could tell that the video game industry was a big deal once it started making so much money that companies started suing each other, and in 1974 Magnavox filed a lawsuit against Atari, Bally Midway, Allied Leisure, and Chicago Dynamics for infringing on Ralph Baer’s patents. Records showed that Atari’s Nolan Bushnell had played Baer’s tennis game for the Odyssey, and Bushnell even stated that "The fact is that I absolutely did see the Odyssey game and I didn't think it was very clever." Bushnell ultimately settled with Magnavox out of court, with the steep agreement that Magnavox would obtain the rights to all the products Atari developed over the next year. Unsurprisingly, Atari delayed all of their products for a year. Pong represented a game industry that was growing large enough for multiple companies to compete with each other for the obscene profits that were starting to appear. 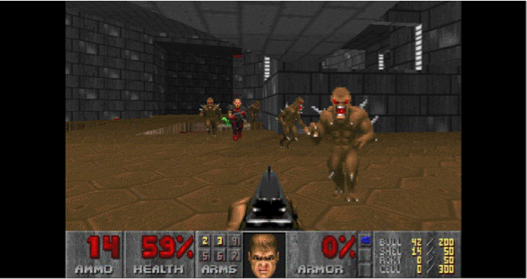 15. Doom (1993). Released as shareware, id Software encouraged people to pass the game around to friends (Mandatory video: Don’t Copy That Floppy!) to see if they liked it enough to buy the full game, which means its millions of sales is impressive but still greatly inaccurate of just how many gamers played it. The Doom floppy disc trading game soon saw the BFG 9000 blasting demons around the entire planet, which eventually got it partially banned in some countries. Back then we didn’t know what we could use our computers for, and at the time the only reason to own a computer for many gamers was just to play this game. Doom was so damn influential on the “First Person Shooter” genre that the genre itself was originally called “Doom Clone” by gamers for four full years after it was released, until the FPS term finally sunk in and solidified. 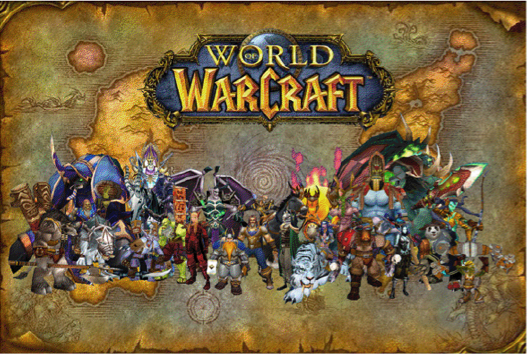 14. World of Warcraft (2004). As usual, if there’s a tactical multiplayer game genre that’s still young and blossoming, you can count on Blizzard to show up and conquer the industry’s new genre addition by killing off all of its competition. MMORPGs like Meridian 59 (1995), Lineage (1998), EverQuest (1999), Dark Age of Camelot (2001), and even the Web browser game RuneScape (2001) all saw moderate success with some games even receiving extensive expansions, but no online game world was as huge, immersive, and successful as World of Warcraft’s Azeroth. It and its expansions have sold over 17 million copies, with the first game’s release being one of the most anticipated PC gaming moments of all time. Still not convinced? Its cinematics are still some of the best visual that the game (and movie) industry has ever witnessed, its auction house started a virtual economy that’s stronger than the economies of some of the real nations on this planet, and no modern day game has affected pop culture nearly as much as this level grinding game god. With several expansions still planned, World of Warcraft will continue its unrivaled legacy for at least another decade to come. What’s even more impressive is that you could take any game company on Earth, give them a blank check budget, and they still couldn’t oust WoW as the #1 MMORPG in the world. It’s so rare to see the game industry bow down and give up to a competitor like we’ve seen with Blizzard’s WoW, but gamers have decided, and until WoW’s expansions come to an end, nothing can challenge its reign. Just ask Square Enix. 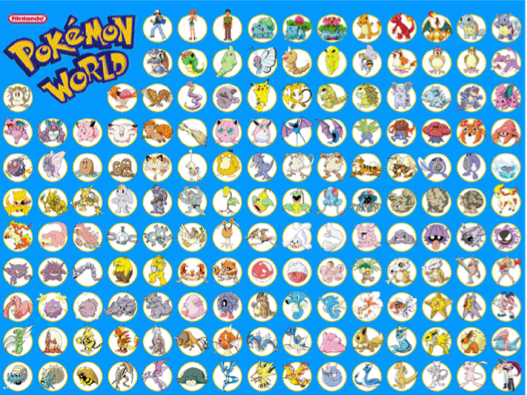 13. Pokémon Red (1996) and Pokémon Blue (1996). So the Mario series has dozens of memorable characters. That’s Nice. Pokémon has over 600, and that’s not even including Ash Ketchum or the other humans from the games. Most games just strive to become the bestselling series of all time, but Pokémon knows what it feels like to become a global franchise that expands past the boundaries of games and become slapped on every piece of media and merchandise imaginable. It’s one of the longest running cartoon shows in the history of television, has over a dozen successful film releases, and became one of the most valuable collectible and tradable card games of all time. When you combine all the sales of all the complete game series in existence, Pokémon ranks second of all time at over 219 million copies sold, which puts it almost 70 million game copies ahead of the bestselling PC series of all time, The Sims (2000). It’s not up for debate: Pokémon is the most successful handheld game series of all time.

12. Dragon Warrior (1986). Also known as Dragon Quest I, it became the template for every future RPG that would release on every game console to this very day. The 1970s and early 80s were dominated by text RPGs that all tried to recreate the Dungeons and Dragons atmosphere on computers, but Chunsoft’s Yuji Horii dropped most of the statistics and made a new kind of RPG that could appeal to all gamers while also instilling the classic staples in them, such as leveling up, incremental spell systems, and a romance involving a damsel in distress. Add artist Akira Toriyama (of Dragon Ball fame) and a classical score by Koichi Sugiyama and you have a variety of areas that Dragon Warrior revolutionized the RPG genre. A huge series followed, and is still alive and strong within the industry across several consoles and handhelds.

11. Ms. Pac-Man (1981). The original Pac-Man was the bestselling arcade game of all time, with over 400,000 units sold worldwide for over $3.5 billion ($7.61 billion with 2012 inflation) in gross revenue. Unlike Pac-Man’s Atari port that was famously atrocious, Ms. Pac-Man was better than the original in every way, including more mazes, more colors in its graphics, and ghosts with better behavior patterns. But the sequel did something even more important for the game industry: it proved that games weren’t a fad. Ms. Pac-Man was practically in every mall, restaurant, and bowling alley in America, and having so many people see Ms. Pac-Man so often made the act of huddling around a video game finally seem normal.